Currently in the 'collapsed' string version of the object, null and empty string both show up the same (don't really show up at all), so you can't tell which is which without expanding.

Having null be represented as 'null' (perhaps in italics font or whatever) would allow the user to differentiate.

This issue is actually not specific to the Foreach Visualization or even to BugAid, but rather, it's just the way Visual Studio shows Dictionaries in general. As you can see, it looks the same in the Watch window (regardless of whether BugAid is installed) :

The problem is actually in the way System.Collections.Generic.KeyValuePair.ToString() was implemented.

Luckily, you can work around this issue with BugAid by simply starring the "Key" and "Value" properties: 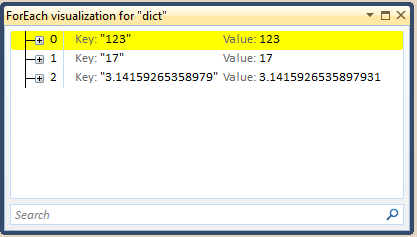 Once you do that, the problem will be fixed for good in the Foreach Visualization, the Datatip, and the QuickWatch window.

In any case, thanks for pointing this out - we'll consider making these two properties starred by default when you install BugAid.